For years, Brian and I have been slowly drinking our way around the world via wines both inexpensive and quite pricey (will anything ever taste as nice as the Château d’Yquem 1er Cru Supérieur dessert wine from 1975 that we had at Daniel?). Lately, we’ve been snapping a photo of the wine labels so that we don’t forget which ones we particularly liked, which has proven especially handy if we’ve had a bit too much to drink. We generally try the wine a second time to be sure it wasn’t a fluke that we liked it. Here are a selection of some of the wines we love, a few new and a few old: 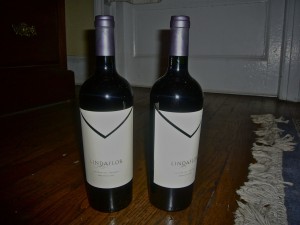 Brian and I had this Malbec at Sucre in Buenos Aires and promptly bought a few bottles to bring back to NY with us (this was in the days when liquid could be taken on planes). We rationed it and drank it slowly because we loved it so much and because at that point it wasn’t available in the US. A few years later, I found some for sale at the Wine Library in New Jersey so I bought a few more bottles. It is a super hearty, full-bodied, knock-down-drag-out kind of red that can stand up to any food you throw its way. It is perfect for steak or any rich foods. It is also, I think, fabulous on its own although it is not what I would call an easy wine, so it isn’t for the faint of heart. Some of our love for this wine might be nostalgic (our trip to Argentina was our first trip together), but I’d recommend giving it a try if you can find it. 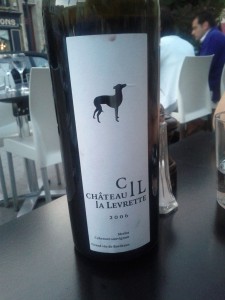 This is a very special wine that Brian and I had at an outdoor cafe in Bordeaux (it was the star of the meal – the food was totally unremarkable). We’ve hunted for this wine in the UK and haven’t found it anywhere although it is for sale online. The wine is described by one reviewer as having a deep intense purple color and tasting of rich ripe fruit and new oak. We’d agree that this complex, yet polished wine, is a star in the Bordeaux class of wines (which are often of really wide ranging quality). This is a wine I’d buy any time and drink on special occasions. 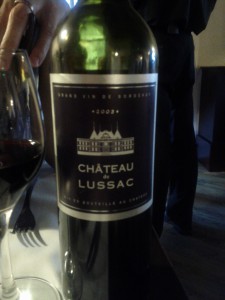 We had this wine in Bordeaux at the bar restaurant companion to the Michellin starred Le Gabriel. It was not the best wine we’ve ever had, but it is a quite nice St. Emillion style Bordeaux that was easy to drink and had nice hints of cherry, vanilla and coffee in it. This is a wine that probably gets better with age. We had it in the summer of 2011. By now, it will be even nicer I think. 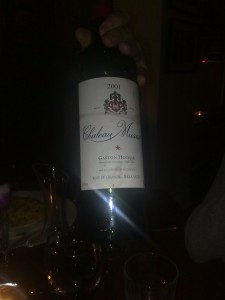 This Lebanese red is incredibly interesting, with a light garnet (my birth stone) color and a clean, spicy nose. It is full-bodied despite looking a bit lighter in color and it has a unique flavor that has hints of berries and cinnamon in it. It is a hard wine to describe and I was a bit skeptical since it is from Lebanon and I didn’t know much about Lebanese wines. Brian and I had this at the Northern restaurant a year or two ago with our friends Mark and Richie. We had saved up our winnings from pub quizzes and splurged on this bottle (it was a whopping £60/bottle!). It was well-worth it for a one-off, although I’m not sure I’d spend that much on it again. I imagine it would be much cheaper direct from a wine store. If it was available for £20 or less, I’d give it a go. 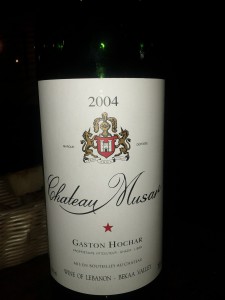 Coincidentally, Brian and I had the smallest taste of this wine two nights ago at the Bakerie tasting room in Manchester. The bottle was nearly empty and the owner of the shop gave us what was left to taste. It was a much nicer version of the 2001 vintage (in my opinion). This one was almost cloudy or milky in appearance and it had a very intriguing mix of spicy flavors in each sip. The taste was round in the mouth and utterly scrumptious. I have no idea how much this costs, but I’d be willing to pay for the chance to have another (fuller) sample of it. 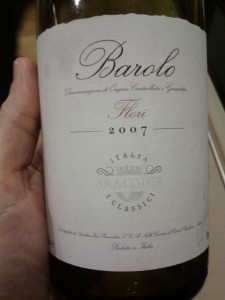 We love Barolos for their rich cherry flavor but they are often super expensive. The cheaper ones tend to be either overly fruity or under developed and sour tasting. I was really excited to find this Barolo which is on the cheap side (about £13/bottle) for this kind of wine (Barolos are generally in the £26-50 range). It isn’t a total showstopper, but it has all the good of a Barolo but in an incredibly easy, drinkable form. This is a good one for when you just want a bottle of wine with no food or nibbles and you don’t want to drink something too cheap (why would you?). 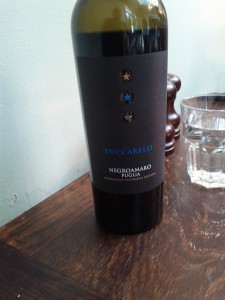 When Brian and I went to Wimbledon this year to see the Olympic tennis finals, we stumbled across this wine (and grape) that we had never heard of before. We both really like Italian wines so we gave it a try. At less than £10/bottle we were a little suspicious, but it turned out to be a very drinkable red, similar to a Primitivo but smoother and less assertive. It has the plumy-cranberry yum of the wines we love and paired well with the food we had (Burgers). This is a good one to stock up on and have on hand for when guests come over. 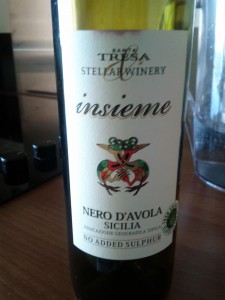 We had this wine at a recent wine tasting and were intrigued because it is a grape we like (Nero D’Avola, from Sicily) and because it is organic and has no sulfur added. Sulfur is what gives you a hangover after you’ve had a bit too much red wine, so we were definitely intrigued. It is also priced at around £10-11/bottle which makes it even more likable… and … it has an utterly delicious taste. This is my current favorite wine and I’ll be hunting it down wherever I go to stock up on it. I’d describe it as juicy, inky, fruity and bold without being overly assertive. This is great on its own or with food. Buy lots of it and keep it for both casual drinking and special events. Your friends will be impressed with this – it tastes like it is much more expensive than it is. A definite keeper. 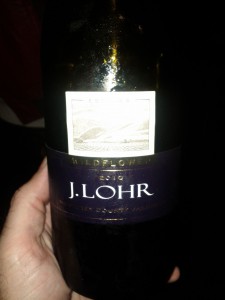 This is another wine we had at the Bakerie wine tasting. The owner gave us some on our way out to try. Brian wasn’t that much of a fan of it as I was – which says something. It is not your average wine and definitely a divider, not a uniter. It is big, bold and filled with berry flavors. It probably would hold up well to food – on its own it is a bit much. I need to get another bottle to be sure, but I think this one might be a rather special warmer for a cold winter’s night. 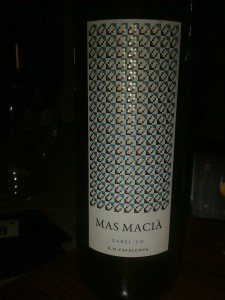 We aren’t huge on white so when we find one we like, we tend to remember it forever. This interesting, mineraly white from the Cataluna region of Spain is surprising and has as much character as the reds we like to drink. Often we find whites lacking in any distinctiveness; this one definitely doesn’t bore. This is how it is described by one wine website (and I agree): “The nose is rich and perfumed with lifted ripe fruit aromas and sweet white spices. The palate is delicate with soft stone fruit and a slightly mineral character, finishing with refreshing citrus acidity.”  For under £10/bottle it is worth stocking up on for spring and early summer. 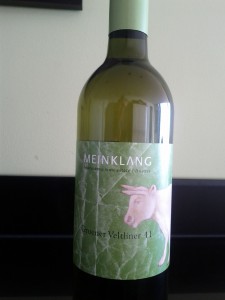 Brian and I were incredibly suspicious of this organic white from Austria. Our experience with Austrian wines is that they are often cloying and sweet. This bad boy is nothing like that. To quote one wine reviewer, “It’s got a lovely, citrus, mineral freshness and a really fun, white pepper pick-me-up finish.” Again, for less than £10/bottle a case of this wouldn’t last very long in our house. I’m glad to have discovered this grape and this producer…it’s on my list for future wine purchases!

That’s all for now. I’ll try to remember to post about the wines we drink as we drink them going forward…that way there isn’t such a backlog in one post! We’ve had a bunch of really excellent wines at Brian’s sister Sarah’s house over the years but I have foolishly neglected to take photos of them. Maybe she’ll add her favorites to the comments below.

2 Replies to “Some Wines I Love”