Yesterday, we had to move hotels for one night because the hotel we’re primarily staying in was completely full for the night.

Our hosts helped us to move to an old building that is partially a hotel and partially still functioning as a seminary. It is a grand building with terra-cotta tiled roofs and white stuccoed walls that sits just below the temple of Diana and right at the edge of the old city boundaries. It’s a lovely place which would make for a perfect (and cheap) hotel for a repeat visit – especially if you wanted solitude and a place to write. It’s quiet and the architecture inside encourages reflection. But… it doesn’t have a pool or offer breakfast, so we’ll be happier staying back in our old hotel – which we move back into today.

Here are a few snaps of inside of the seminary.

After a leisurely lunch and a quick wander around some shops, we spent the day rehearsing and dealing with technical stuff inside the performance space. Our first show is tonight at 11pm (!), so we were all eager to run through the piece and see how it worked in the space.

When we arrived in the space at 3pm, the technician Fernando was setting up the lighting and sound system and doing some of the other small things we needed – like moving curtains to create a backstage area. After he finished we did a few warm-ups and a sound check before doing a first run. We had requested a double bass, which one of the students normally plays during the show, but it had not yet arrived. We were told it would arrive in about an hour, but we decided to run through the show anyway and just pause when it arrived to integrate it. Good thing we didn’t wait, because the double bass never materialized.

The first run through was very ropey… some of this was because it has been a few days since we last ran through the show and some of it was because the space was so different. Immediately upon starting the run through it became clear that the acoustics of the space were even more insane than we originally thought, which meant that speech was very difficult to understand in the many varieties of English accent that my students speak with. We also discovered that key moments that worked in a studio space in Crewe, really did not work in this space, which meant that previously humorous parts were totally dead feeling. And worst of all, the ‘backstage’ entrances that were such an integral part of our original version of the show were not visible enough in this space because of large columns that blocked the audience view of them.

After the first run, we had a long discussion and decided to cut a few parts that were not working or were dragging, and we made dozens of edits to try and tighten up the piece and make it clearer to a non-native-English-speaking audience. My main note for the performers was that if there is a direct way to do something, choose that; rather than going for layered, complex and subtle choices, this space really requires clear, simple and direct choices. We then spent about an hour or so working with each of the spoken texts at microphones to a) simplify the way the performers were telling their stores and b) work on diction. We also replace some very English references with ones that would translate to Portugal (goodbye Fruit Salads, hello M & Ms; goodbye Sunny D, hello Tang). Working through the notes after the first run was a good demonstration of something I had said would likely happen, which is that the show would probably need to bend and alter based on how it felt in the space.

We started our second run at about 7pm after and the changes made a world of difference. I ended the evening feeling like the show should really work in the space and with this audience. Of course you never know how a piece will be received (which is part of the joy of touring) but I think we’ve managed to translate our show into a form that is more legible to an international audience. I think there is a high likelihood that some parts will still be confusing and it’s possible that the irony might not translate, but hopefully the alterations we’ve made will still make for a pleasurable evening. We’ll know soon enough!

After rehearsal, we all went out for pizza and a well-earned beer before heading back to our rooms for some much needed rest.

Now, I’m off to find some breakfast before dragging my suitcase back to our pool-bearing hotel. We’re going to have a rehearsal at noon when we get to our new and former home – to tighten up two spots that still don’t quite work. After that, it is a mellow day poolside for me before having a nap in preparation for a late show tonight. I’m hoping the students are all excited and ready to have their international debut! 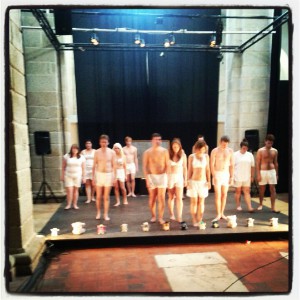