Tonight, Brian and I are tasting the 2010 Azienda Agricola Grillo Cabernet Franc at the recommendation of our local wino, I mean wine shop merchant. We told him we wanted to try a new red wine that wasn’t too expensive and that wasn’t boring (but not so interesting that it’s difficult). He recommended this easy, drinkable wine and we like it a lot. At less than £15 it isn’t a budget buster but isn’t on the low-end either.

It smells fruity and dry with some strong peppery notes. That peppery-ness is present in the way it tastes too, but mostly it is quite round, smooth with moments of pique to drink. The sharp peppery tones mellow as the wine flows over your tongue. It is juicy but not as juicy as a Barolo and there is a bit of bay-laurel to it as well. We’ll definitely drink this one again.

We had it tonight with some taleggio cheese and a bit of walnut/apricot bread and the wine held up well without overpowering the creamy taste of the cheese. If there is any left, we’ll have it with the roast chicken that’s in the oven (I have a feeling we might finish it first though).

This isn’t a wine I would hunt out, but if I saw it, I’d definitely buy a bottle. 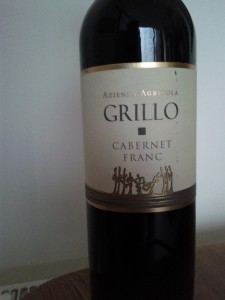 About Silence – free to you
Frankenstorm

Thoughts on TAPRA and Academia In General…