This post might be slightly incoherent from jet lag and the swirl of being in two worlds at once. Apologies in advance.

We had a productive first day at the Tramway today where Proto-type are working on a big music-driven, performance piece in a very big space. I’ve wanted to make a really large-scale show for a long time and this one comes close to being hitting that mark. Something about the expansive nature of a piece that is fully (or nearly fully) sung through and where the canvas for the visuals is the size of a multi-story building, feels totally decadent. I’ve written about the show elsewhere on this blog and over on the Proto-type blog, so I won’t go into all the details of the show again, but it toys with themes of death, love, loss, forgiveness, faith and the way tiny actions can become meaningful for no good reason. I guess I always write shows that are in some way about my current mental state (egotistical, I know), but there is something emotionally intense about this piece for me. Even the song about the red-faced, scabbed face man who beats his girlfriend (sang as a kind of sea-shanty) makes me tremble a bit.

It has also been super surreal being in the UK and back in a rehearsal room after making my move to New York. Suffice to say, it has brought up a lot of emotions that are not in this show but are related to my relationship to theater, work and life. It is a complex mush of feelings but at the moment I’m just glad that I’m going to be able to see this piece to fruition because, frankly, I think it has the potential to be brilliant. We’ll see if it turns out that way – there is often a fine line between brilliance and garbage in my opinion. We’re risking a lot with this piece, but I don’t seem to be afraid of risk…

Here are two snaps of what we were up to today; more soon:

Rebecca behind the gauze with a test of Adam’s words projected on the inset screen. 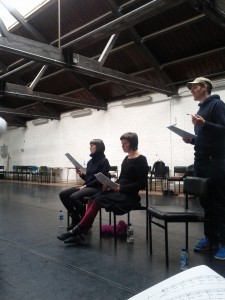 Gillian, Leentje and Wes learning the very difficult prologue, with its insanely close harmonies and difficult-to-sing-dissonances.

I’ll post more photos and maybe some video later this week as we get more into the piece. So far, we’ve hung a giant gauze curtain (bigger than the one we used for Whisper, which was too small for this space!), focused a million lights, hung projection panels and screens, rehearsed a song that we’ve been struggling with for many months, did a sound check and tested animation on some new surfaces. By the end of the day, we were all wiped out but I’m feeling confident that this thing has legs.

Hopefully over the next few days we’ll get it into shape for our showing Saturday, which is already selling like crazy  (more pre-sale tickets than most Tramway shows and it is only a work in progress). If you’re in the neighborhood, come on by.

Somewhere in a far away land
Notes on TGTGATG…