Today was a very busy day of meetings, visits to rehearsals and a look at some new Armenian Theatre. My morning started with a wander to Opera park where I had a coffee and omelet before meeting Narek for my first meetings. We walked to the Yerevan State Conservatory, which is a music conservatory that has about 1,000 students at BA, MA and PhD level.

My first meeting was with the super lovely Alina Pahlevenyan, director of the Folkloric section of the conservatory. Here we are together: 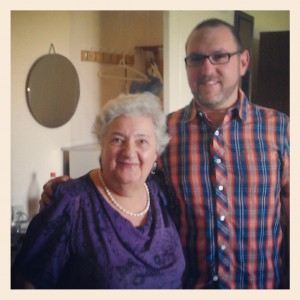 Alina told me a bit about what her role is in the conservatory and quite a lot about Armenian folk traditions. Every student at the conservatory has to study Armenian folk music (which I think is excellent) and they also are adding a section where students will be able to make traditional Armenian instruments. In addition to teaching the songs and dances, she also does research, archival work, publishes a journal, runs a conference and sets up annual festivals and expeditions. She is quite an amazing woman. I was interested in meeting her partly because my colleague Niamh at the Acting School at MMU runs an expedition every two years as part of an MA she teaches. The expedition involves going to a country and collecting folk songs and dances which then form the base of a performance that is made with the students and Polish company Song Of the Goat. Alina agreed that she would love to help Niamh organise an expedition and she also showed me some books of songs that they’ve been publishing as part of their work to keep Armenian folk music from disappearing. Later in the day, I bought one to bring back to the UK.

After meeting Alina, I met with the Rector and three of the vice-rectors of the Conservatory, including the man responsible for international development. We had some delicious Armenian coffee while we talked about what possibilities there might be for collaboration. It seems like there could be some good links possible for my music colleagues if they want them – everything from curriculum development, tutor exchanges, and students coming to work in Armenia to make some kind of performance. They were particularly interested in hearing about the opera-concert piece I’m making with Proto-type and suggested that it would be interesting if I brought over some theatre students to make a piece in Armenia which they would create the music for. This could be a good way of linking some of the things I discussed at the Theatre Institute with the Conservatory. It will all come down to time and money, though, so will need to talk this through with my university administration.

After my meeting with the Rector, I went to sit in on a rehearsal of an opera singer in the small opera studio at the conservatory. It is a lovely small space that has not really been updated too much since Soviet times. One of the things I have been a bit sad about here is how many gorgeous buildings there are that are in dire need of a bit of love and attention (and money). Hopefully the economic situation will improve and some of these buildings will get the attention they deserve.

Here are some snaps of the conservatory and the theatre I visited: 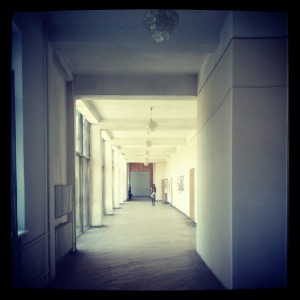 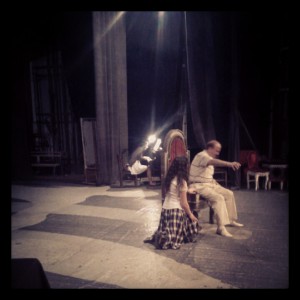 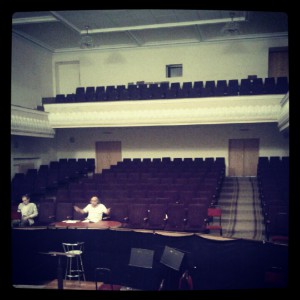 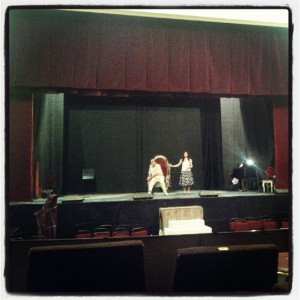 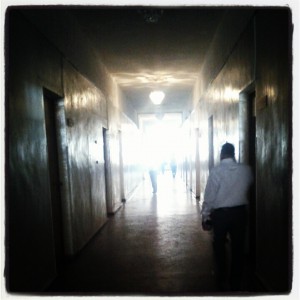 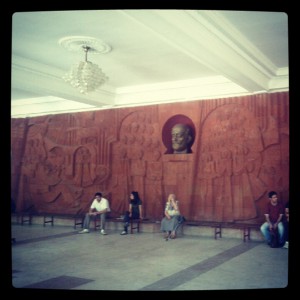 After these meetings, Narek and I went back to the British Council offices and had lunch in the canteen (this was some of the best food I’ve had…), before I was driven out to Yerevan Regional College #1 where I met with the vice-Rector briefly, the number one actress in Yerevan (?) and a class of very eager and excited drama students. I told them a bit about my work with Proto-type, showed them some images and asked them about what their interests are. They were very sharp kids who really wanted to have a workshop with me. Maybe if I can come back, I’ll be able to visit them for longer to deliver some practical work. I gleaned that they focus primarily on Stansilavski work and a bit of Grotowski – which makes sense given where we are in the world. Here are some shots of them and me with them: 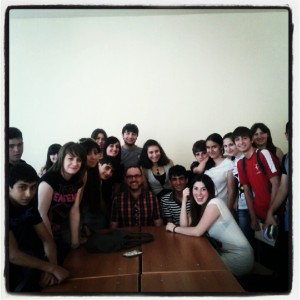 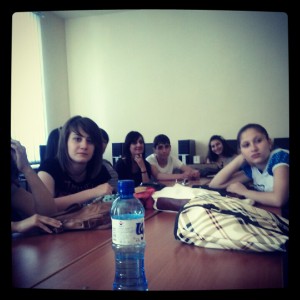 Next up was a meeting at TUMO, an amazing building overlooking Yerevan city centre that was opened six months ago. It is a technology and art centre dedicated to educating young people and arming them with the tools they need to create innovative work creatively and in terms of business. I was met by Melikset, who runs the film programme. He took me through the space and showed me the incredibly flexible workstations they have for kids. They have 6,000 young people registered to visit and a waiting list of others. Essentially, the young people sign up to come for two-hour sessions once or twice a week that involves time for them to do training sessions on a bespoke software set they have built to run on macintosh computers, visits to films and workshops. They recently hosted a TEDxKids event as well. The space was absolutely stunning – it isn’t fully filled with activity as it is so new, but there is so much potential. It is much larger than anything I’ve seen in the UK (maybe 10 times the size of Cornerhouse and three or four times the size of FACT) and the equipment is all beautiful. Melikset then took me to his office where I met his colleague who programmes the photo exhibits and several other colleagues. I took them through some of my work and discussed some of what I might be able to offer. There was a lot of enthusiasm from the team about the way I might be able to help introduce Armenians to performance and technology (we talked about Fortnight and Virtuoso mainly… didn’t get to Whisper/sound effect stuff). The director joined us after about forty five minutes or so and we continued talking about possibilities. I am not totally sure she understood that I was a theatre maker, but everyone else did so hoping something comes of this meeting as it is a truly amazing place that sits perfectly with my interests and expertise. Here are a few snaps: 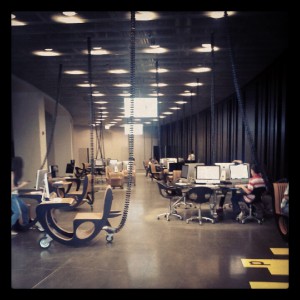 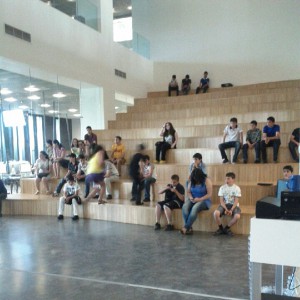 After an hour and a half at TUMO, I made a quick stop at a bookstore to get a volume of folk music and then went to Small Theatre to watch director Vahan Badalyan teach a workshop with his young company. He is in the process of thinking through some ideas for a new piece with them and I got to see this process. Much of what he did was similar to how I would approach working with young people. There was a focus on physical work exclusively (no vocal work or text at all) and some really talented young performers in the group. I felt lucky to be able to watch. Vahan also gave me some DVDs of his work to look at so we can figure out if a collaboration between us (Proto-type or MMU) might make sense. I have a feeling it could be a good fit for both. Here are a few images of the workshop taking place: 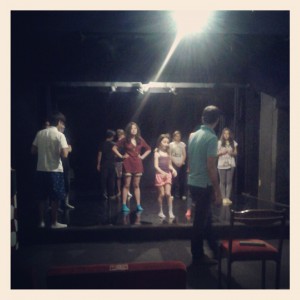 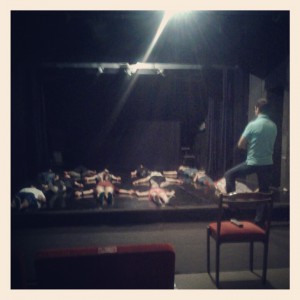 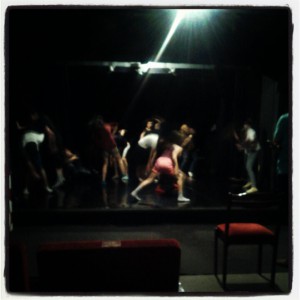 I had to leave right as the workshop ended to go see a preview performance of Don Quixote at the Malian Theatre. I met the Artistic Director of the theatre, Narine Malian, at the British Embassy cocktail party the night before and she invited me to the preview. I missed the first few minutes as I had to run across town to get there, but I am glad I made the effort. The theatre is super lovely – a soviet era building that was part of a cinema and has now been renovated to have its own entrance and a very well designed theatre. It is the nicest of the larger theatre spaces I’ve been in while here in Yerevan (NPAK has an amazing space, but the Malian is a more acoustically sound space). The piece that I saw was very experimental for this company – which means that they were using text. Apparently, most of their work had been silent in the past. It was an incredibly visually rich performance with some really strong performers in it. It had hints of Peter Brook (albeit on a much smaller scale) and reminded me a bit of Marat/Sade at times. I had no idea what they were saying but I got the sense that it didn’t really matter if I understood the words. I am going back tomorrow morning after my first meeting to talk to the Artistic Director a bit about possible collaborations. Here are some shots of the piece and of the outside mural at the theatre: 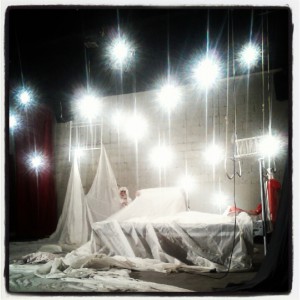 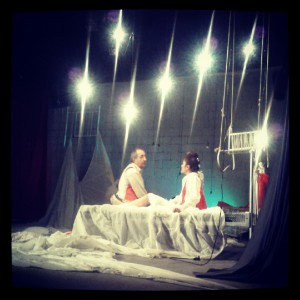 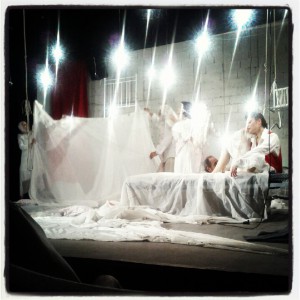 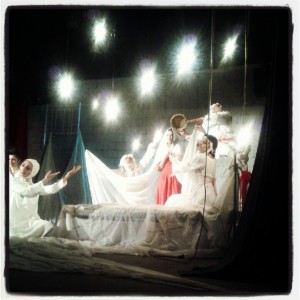 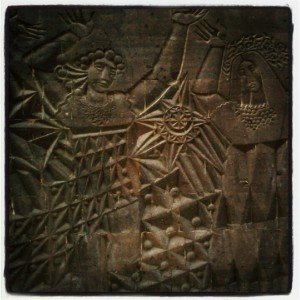 After the performance Narek and I walked back towards my flat and I came upstairs to drop my stuff off. I then went out for dinner next door at a Georgian restaurant. Here are a few snaps: 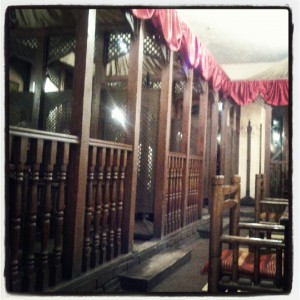 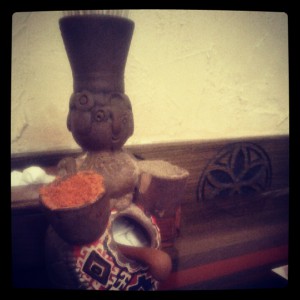 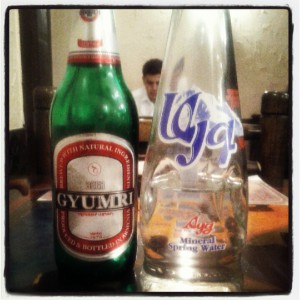 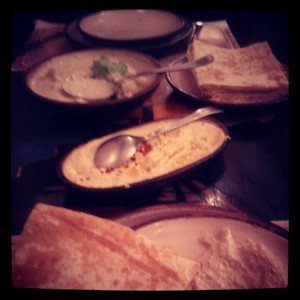 It was a very late dinner and I’m now just finishing final touches for my workshop tomorrow on writing for theatre via SMS. Hope it goes well! I also have a meeting with the Rector from the Theatre Institute (he wasn’t there for my scheduled meeting on Friday so I met with a dean) at 11.30am. Tomorrow is my last day so hopefully it will end well. Hoping to have dinner with Vahan and possibly with a friend of Cathy Costain from British Council Egypt. If all goes to plan it should be a great ending to an eventful trip. I’m going to have a lot of work to do when I get back to the UK figuring out how to develop all of these threads!