I arrived in Atlanta on Thursday for my ten-day residency at Kennesaw State University which is located just outside of Atlanta. I’m working with students in the Department of Theatre and Performance Studies in a variety of units ranging from an audition practicum (which I guest lectured in on Friday) to Senior Seminars and running devising workshops, giving a lecture about semiotics and design and teaching a few writing/storytelling classes. In addition, my show About Silence is being performed over three nights by a range of people from the Atlanta theatre community.

Today, we set the lighting and sound in the theatre and worked with some students on the piece. I’ve made a number of big changes to the show for this outing including cutting out the technology (the script is now on paper), adding in a different scenography and adding a lighting unit that is bespoke to the show.

Here is a view from above of the lighting unit and the lovely, custom-built table the KSU folks built for the show: 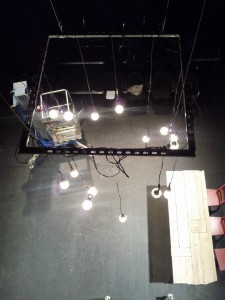 And here is a view with the Production Manager of the space sitting in so we could see what the lights looked like: 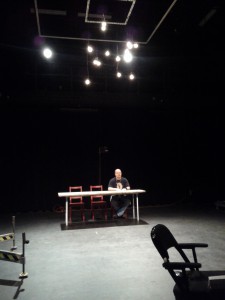 After setting the lights, we had two different student groups come to run through the show. This was a chance for me to remember what notes I need to give the performers before they see the text and also an opportunity to see how the changes I’ve made worked in reality. One of the bigger changes is that I removed the laptops that the performers used to read the text off of, instead replacing them with stacks of paper. Since the performers are encountering the text for the first time, live in front of an audience, I wanted to remove the barrier that the laptop created between the performer and the audience. This also gave us the opportunity to allow the performers to crumple up the pages as the piece went, which creates a lovely sonic texture, breaks up the poetry of the piece and creates a nice visual that isn’t too complicated.

Working with the students was also about introducing them to working on a text of this type, which doesn’t have characters and is very intimate in its relation to the audience. I think they got a lot out of it; I know it was lovely for me to hear the words in their very young and fresh voices. Here are two quick snaps of the first group performing the piece: 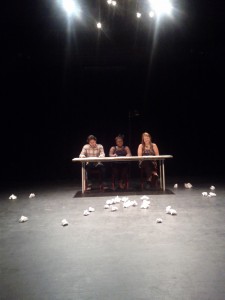 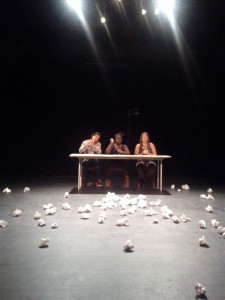 This piece is extremely personal to me as it was written all in one sitting when I was going through a major change in my life. Embedded within the text are a number of references to real things from my life and hearing it today, at another potential point of change, was extremely emotional. Several times in the first reading of it, I felt like crying and had to hold myself back from being a blubbering idiot. I don’t know if it will effect the audience in the way it affects me (I doubt it will exactly), but I hope it does create some kind of emotional response that lasts.

Now, I’m off to eat Columbian food with the Chair of the department and my good friend Professor Rebecca Makus, who invited me here in the first place!

Rainy day
A Walk in the Woods and Taste of Marietta

An adventure in radio