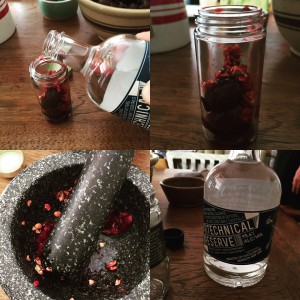 A few months ago, my friend and former colleague Andrew Kyrejko gave me a gift of a special edition high alcohol content product from the distillery he is involved with called Industry City Distillery (who make delicious vodka from beets!). This magical potion is called Technical Reserve and is so strong that if it was any stronger it would cease being liquid and become ether! It is meant to be used to create tinctures and bitters, so I thought I’d give it a try by making some bitters, which turns out to be an addictive habit. They have a bunch of interesting recipes on their site, including this one for Limoncello, but I haven’t tried any yet. My bottle is empty, so need to get a refill before I can try any other recipes.

Being a bit of an experimenter, I didn’t look for any recipes. My sister Rose, who was in town for my first experiments, and I just decided to give it a whirl, eyeing the cherries we had been eating which were on their way to being over ripe. Rose suggested that using the cherry pits along with the flesh would be a good idea, so we crushed up some cherries and many more pits in a mortar until it was a crunchy, mushy, red mess and then filled a glass bottle with the cherry mush. I then filled the bottle with the Technical Reserve, gave it a good shake and sealed the bottle.

We did a similar thing with cardamom – crushed the seeds in a mortar and pestle, dropped them in a bottle, and then sealed them up. We put those on a shelf to sit for a few weeks. A day later I did the same thing with some dried lavender flowers (and stems). Last night, after about two-three weeks of curing I strained the liquids into dark bottles with droppers to use in cocktails. They each have a brilliant color (the lavender is a blue-green that is gorgeous) and a lovely flavor. I can’t wait to use them in some concoctions. 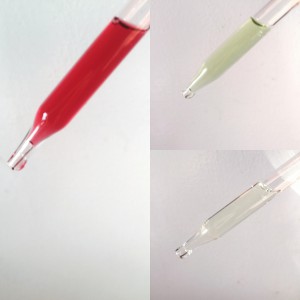 While I was bottling, I decided to make a bitter I use a lot: orange. I took the peels of a bunch of oranges and dropped them in a bottle, filled with Technical Reserve, sealed it up, gave it a good shake and will let it cure for a few weeks. Can’t wait to see how they turn out. 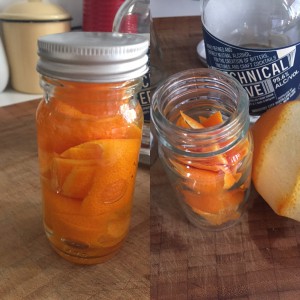 One note of caution: this stuff is so strong that a few drops that fell on my wooden table completely stripped the stain off of it! So, careful not to drip any.

More photos of the process below!

Perhaps your next career should be soaps and vodkas.

That sounds like a lovely idea! I’ll just be an Artisanal factory: if it can be artisan made, sign me up!