Yesterday was the last day of the most recent set of rehearsals for my company Proto-type Theater’s new opera project. We’ve been responding to the Alberts Camus novel L’estranger. Originally, we thought we might be adapting the novel using the opera form (i.e., full sung through and performing the narrative) and working with the laptop ensemble to make the voices of our non singers sound operatic. Through the first two rehearsal periods, it became clear that the laptop ensemble had a lot more potential than simply running effects over the non-singer’s voices, and it also became clear that even if they did that it would never really sound like opera in the classical sense. So we moved to a looser exploration of notions of opera, fixating on the idea of a performance that was entirely sung. We also moved to a looser understanding of the relationship to the book and have ended up really responding and not necessarily telling the story.

So, after these short periods of rehearsing it seems like what we are doing is using a concert form as our structuring idea. What that decision has meant is that we have a clearer idea of the relationship of the performers (the three ‘non singers’ and the three ‘laptop ensemble musicians) to the audience and to the material they are performing. We also have been able to bring in other content beyond the book and are now working with ideas related to the human relationship to the god-like technology we all carry around with us on a daily basis. The result of all of this is that we have a structure that is split into thirteen ‘chapters’ or musical movements, organised a bit like a set list for a gig. The music so far ranges from quite choral and tightly harmonised to rambling folky music to quite ethereal and atmospheric. The concert structure has allowed us to find a way to have all of these distinct styles together under one aesthetic umbrella.

We have also begun exploring the way lighting might be reactive and responsive in the space and how animation might feature as both scenographic element and emotional context for sections of the piece. The lighting that we are working with is largely object based, drawing inspiration from objects in the novel and also objects that rub up against our understanding of some of the technologies we’ve been working with/thinking about. Part of our thinking at the moment is that these objects might be interactive so that the performers can set visual landscapes in motion through the way they trigger the lights (without it looking like silly technological gimmickry, which we are keen to avoid).

We ended our rehearsals with about 15-20 minutes worth of rehearsed material, some of it more polished than other bits. We also have texts written for 11 of the 13 chapters, although some of that text might change as it was written rather quickly by me. In the next few weeks, we’ll be hearing more of the compositions from the laptop ensemble and the performers will be learning the music. When we reconvene at the end of May, we’ll hopefully be in a good position to work through quite a bit more of the piece. This is an exciting and strange new adventure, but so far its feeling good. Here is another snap of rehearsal (from yesterday)…it doesn’t look like much yet, but we’ve actually figured quite a lot out! 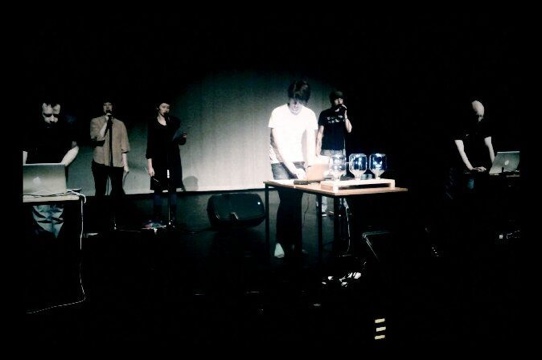 Market in Madison and Breakfast at Marigold Cafe