This post also appears on the blog of my theatre company, Proto-type Theater. You can view it there by clicking here.

Last Thursday I flew to Amsterdam for a quick trip to the Social Cities of Tomorrow conference which was being held at the MC Theatre. The last time I was in Amsterdam was in 2004 when I was (briefly) a student at Das Arts, a postgraduate programme for theatre artists. My time at Das Arts wasn’t fabulous…the programme was going through a massive shift and it wasn’t at all the advanced laboratory I had expected. I was trying to push my practice into more conceptual territory at the time, and the head of the school wanted me to keep doing the same work I had been doing for years. So, my time living in Amsterdam was a brief encounter that was very much clouded by negative feelings. It was really nice, then, to come return to rediscover Amsterdam out of that context. 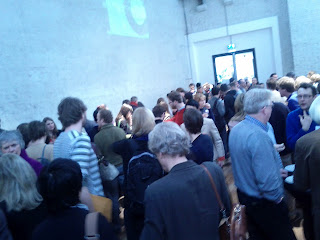 The crowd at lunch, MC Theatre

The conference was incredibly inspiring, despite the fact that I was getting a progressively worse cold/flu thing over the time I was there. The structure of the programme was arranged around three keynotes from remarkable presenters: Usman Haque (founder of Pachube.com), Natalie Jeremijenko (founder of the xDesign Environmental Health Clinic [TED TALK HERE]) and Dan Hill (from Sitra). Between each of the keynotes, there were showcase presentations of work spanning a range of projects that were in some way addressing the notion of a social city. Our friends at Uninvited Guests were there presenting their R&D project from the Theatre Sandbox scheme called Give Me Back My Broken Night. Most of the conference talks were not about art or theatre (with the exception of the Uninvited Guests showcase), but I found my head buzzing like crazy throughout the intensive day. It was a truly inspiring set of speakers that is making me really wonder about what I’m doing with my life. I don’t know exactly what impact it will have on my long term, but it has certainly unsettled me (in a good way).

To give you a sense of why I found it so inspiring, here are a few snaps of thought from the day, in a random list that mimics the firing of synapsis that was happening in my brain:

The notes above might seem to have nothing to do with art making and theatre, but I think they do. How can we make art, specifically art in cities as Proto-type has tended to do, without dealing with the consequences of our collective actions as humans? We need to find ways to live our values through the kind of work we do, how we do it and who we do it for.

And, most of all, playfulness is a brilliant strategy for insuring that our voices are heard.

On that note, I thought I’d share a somewhat crappy video of what was happening in the adjoining cafe to the theatre during the lunch break (check out their outfits and the song they are playing relative to their age). Only in Amsterdam:

Something new
Come Study With Me

Reviews for Berries and Bulls